At the end of July the City of Vancouver accepted proposals for the ideas competition Re:think Housing. Rethink was an ideas competition initiated in order to “generate a broader discussion of possibilities for Vancouver’s affordable housing crisis.” With this goal in mind, Meta Vancouverism and Vancouver Islands were submitted by Jessie Andjelic, Albert Dijk and Philip Vandermey as grenade projects in response to perceived contradictions within dominant themes of Vancouver urban planning – affordability, sustainability, nature, speculative urbanism, sprawl and the condo rush. 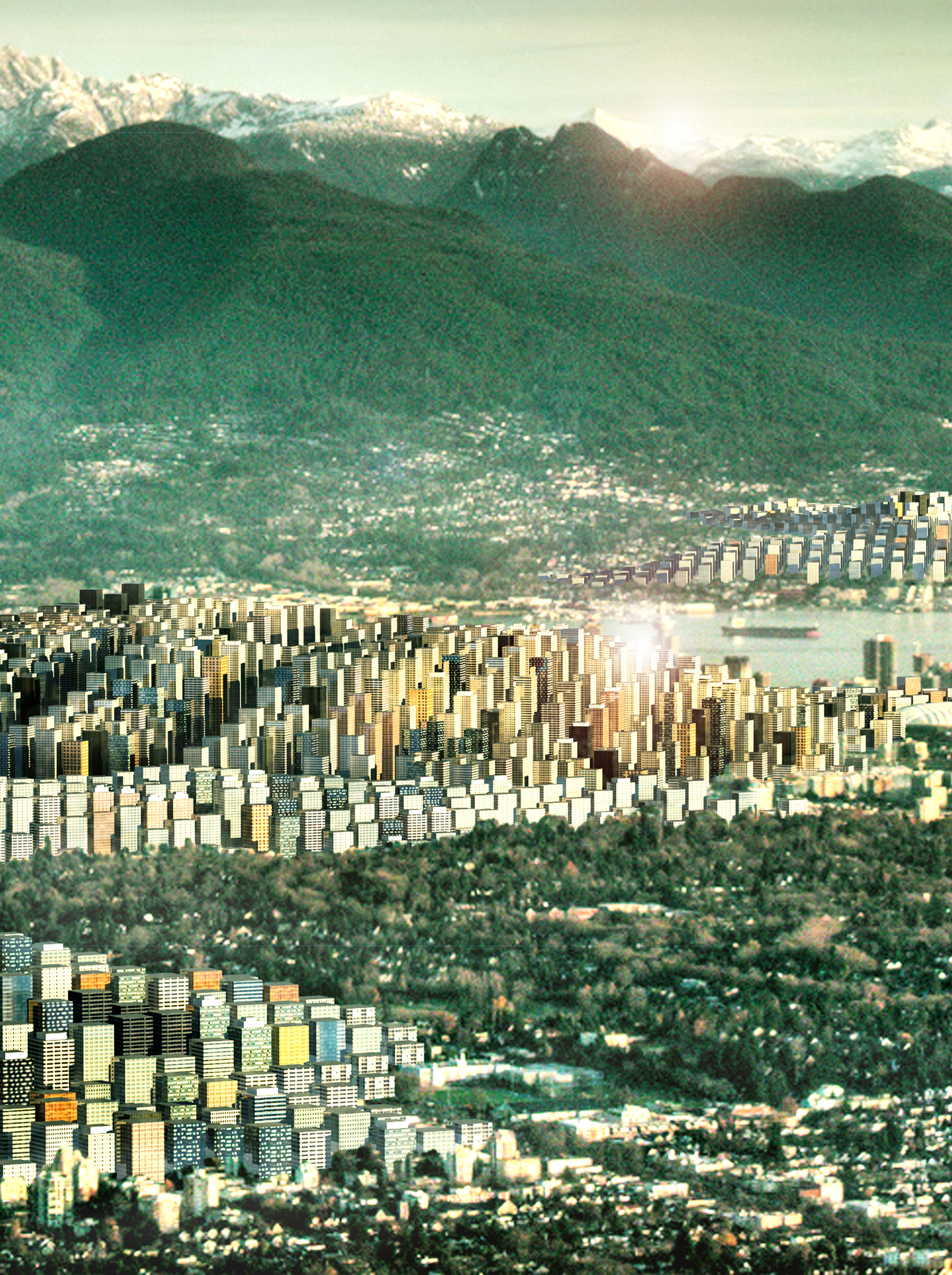 Vancouverism – Urbanism by Real Estate Speculation
Affordability and high quality urban space are incompatible with the prevalent urban design model of the day – Vancouverism. While Canadian master architect Arthur Erickson envisioned large megastructural towers with the intention to build up rather than sprawling out, therefore preserving the city’s nature, his ideas have been warped and re-presented as Vancouverism: a flashy combination of slick blue/green/grey towers, low plinths filled with high end walk ups and shops, and protected view corridors to ensure high property values. These high rises are the vertical equivalent to suburban speculation; profit driven pro formas constrict the quality of the city to what fits on a real estate sales sheet – number and types of rooms, floor number, and area. As such they are made popularly agreeable by predictability – monotonous, neutral, boring. To some politicians and most developmental lobbyists these towers are a boon; they can easily be pitched as green since they do provide a viable alternative to sprawl. Yet, the promised goals of affordability and a better quality urban space are not actually attainable within this model of speculative urbanism. And, in order to negotiate higher building limits, sterile and empty public spaces with token plants are provided at grade; privatized outdoor plazas lined with franchise shops. Gentrification occurs over the scale of the entire city by pinching existing urban fabric between high end towers and high end suburbs. These contradictions must be addressed both within and beyond the context of Vancouver, as Vancouverism has been anointed THE urban model of the beginning the 21st Century, and can now be found afflicting cities on every continent.

Meta Vancouverism
Cities that lack long term structural vision to direct physical growth, tackling issues as independent rather than complex interrelated ones, become slaves rather than benefiters to their own chaotic processes. Beautiful cities balance planning and structure with flexibility to become functional and recognizable urban landscapes. Arthur Erickson, one of Canada’s greatest architects, envisioned large megastructural towers to make the most of the city while preserving the nature.

Vancouverism is hot. Shimmering glass towers, plentiful green space, an efficient use of land, and expansive views of the natural landscape have pushed Vancouverism into the international spotlight. Some say that after mayor Tom Campbell was succeeded by TEAM, downsizing forced the suburbanization of Vancouver to accelerate. Land ran out and prices went up. In addition to affordability issues, and like many contemporary cities,Vancouver experienced increasing socioeconomic polarization and segregation. Yet Vancouver isn’t out of land. The issue is that the available land isn’t being used as well as it can be. Vancouver city has 7 times the density of the surrounding metropolitan districts. If the entire metropolitan area were developed with the same density of Vancouver city 14.5 million people could fit within the existing urban containment boundary.

What if we strategically combined the benefits of Vancouverism with the open spaces and suburbs people love, and the efficient multicentric urban model already in place! Green spaces for pedestrians and dense multifunctional urban corridors could form along the existing transit network. And by stretching and dividing Erickson’s sketch, a new topographical urban form is created. A gradated density map emerges, one which eases traffic issues, increases density and enhances the multicentric urban model. A vertical limit topography creates density where it’s needed, maintains views, and eases the transition from urban centres and corridors to low density zones. As the city grows, municipal restrictions can respond, allowing the city to expand vertically rather than horizontally. The resulting density will serve to bring supply in line with demand, cooling the housing market and bringing prices down. Multifunctional towers can provide for a range of programs, and the base design can be coordinated to reclaim transportation spaces for public transit, pedestrians and cyclists.