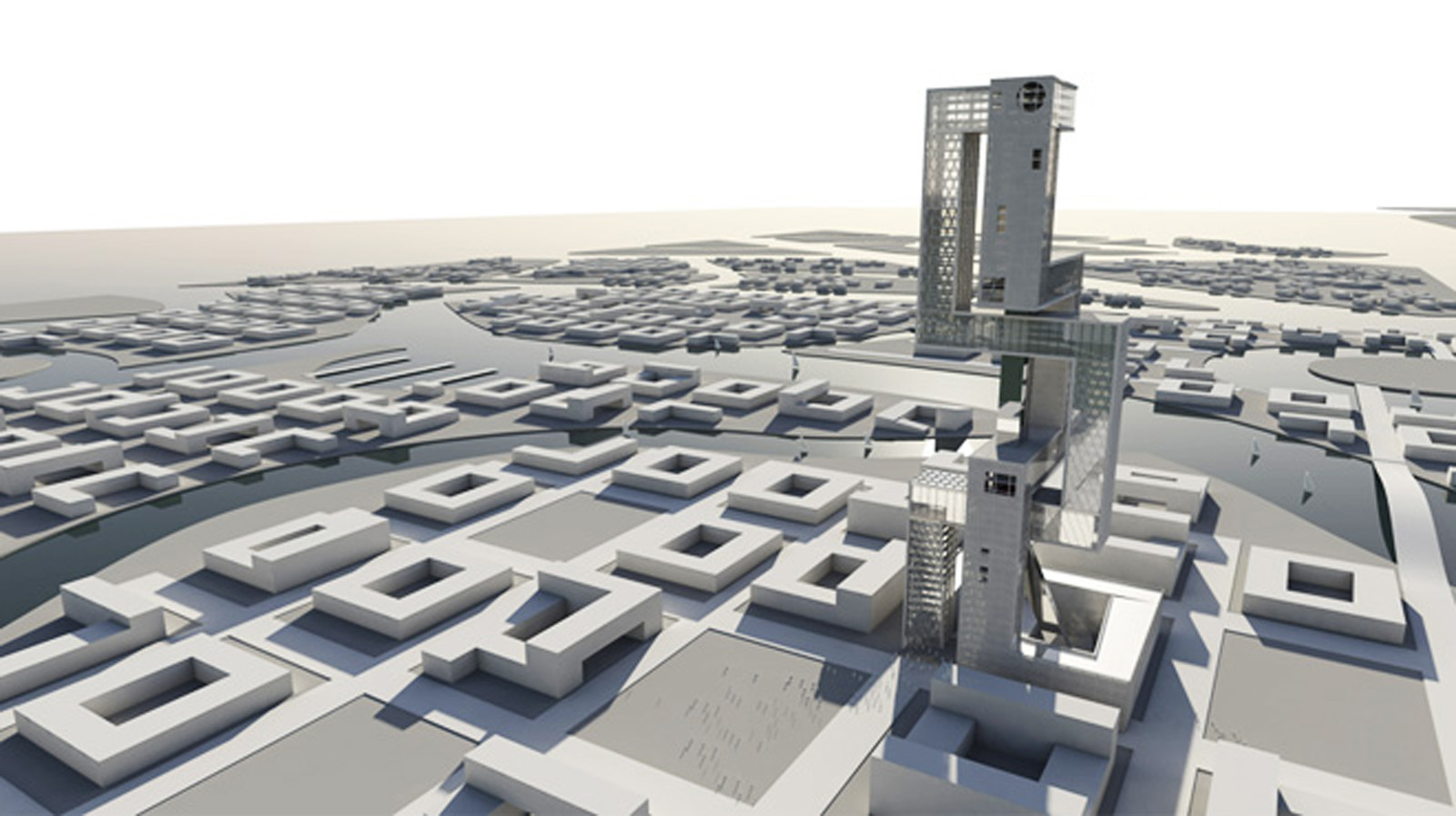 We propose a ‘Système Internationale’ (SI) as a redefinition of the typology of the skyscraper, in which the characteristics of its performance are clearly outlined. Our proposal tries to generalize the design conditions for the implementation of the skyscraper typology in contemporary cities. The globalization of architectural discourse since the industrial revolution led to a singular modern ideology; towards an ‘International Style’ in architecture. But, within this light, the skyscraper typology still lacks a coherent generic definition that justifies its existence.

Performance Characteristics
1            Why have we locked ourselves into gated, mono functional towers? We regard the skyscraper as an urban feature that enables connection and acts as a durable catalyst within the urban fabric, rather then facilitating solitude through gatedness. The traditional stand-alone vertical typology resulted in a detached, vertically outlined society; while people are naturally more comfortable in horizontal living environments that stimulate interaction and community sense. So let’s stack the serving functions, integrate through programmatic necessities and spread out the living environment horizontally to allow for grade level social environments.

2            The detached segregation also exists at the level of the city. In contemporary urban areas, the largest share of the program consists of housing. As a result of functional segregation in modern town-planning these dwellings have been grouped together as islands without identity or ‘raison d’être’. The skyscraper provides urban identity and connected program mixture to function as a community hub. It evolves out of the traditional building block and blends within the urban plinth. This block already has the qualities of an integrated city in which needs can be fulfilled locally. The size of the skyscraper above the block depends on the area that is served.

3            However, the needs of the contemporary city do not correspond to the direct desires of people. Contemporary housing areas fulfill basic needs for shelter and safety, only step one in Maslow’s pyramid for human desires’ evolution. The skyscraper can be a programmatic addition in this evolution at the city scale, starting with the basic needs at the bottom and ending in transcendence at the top. 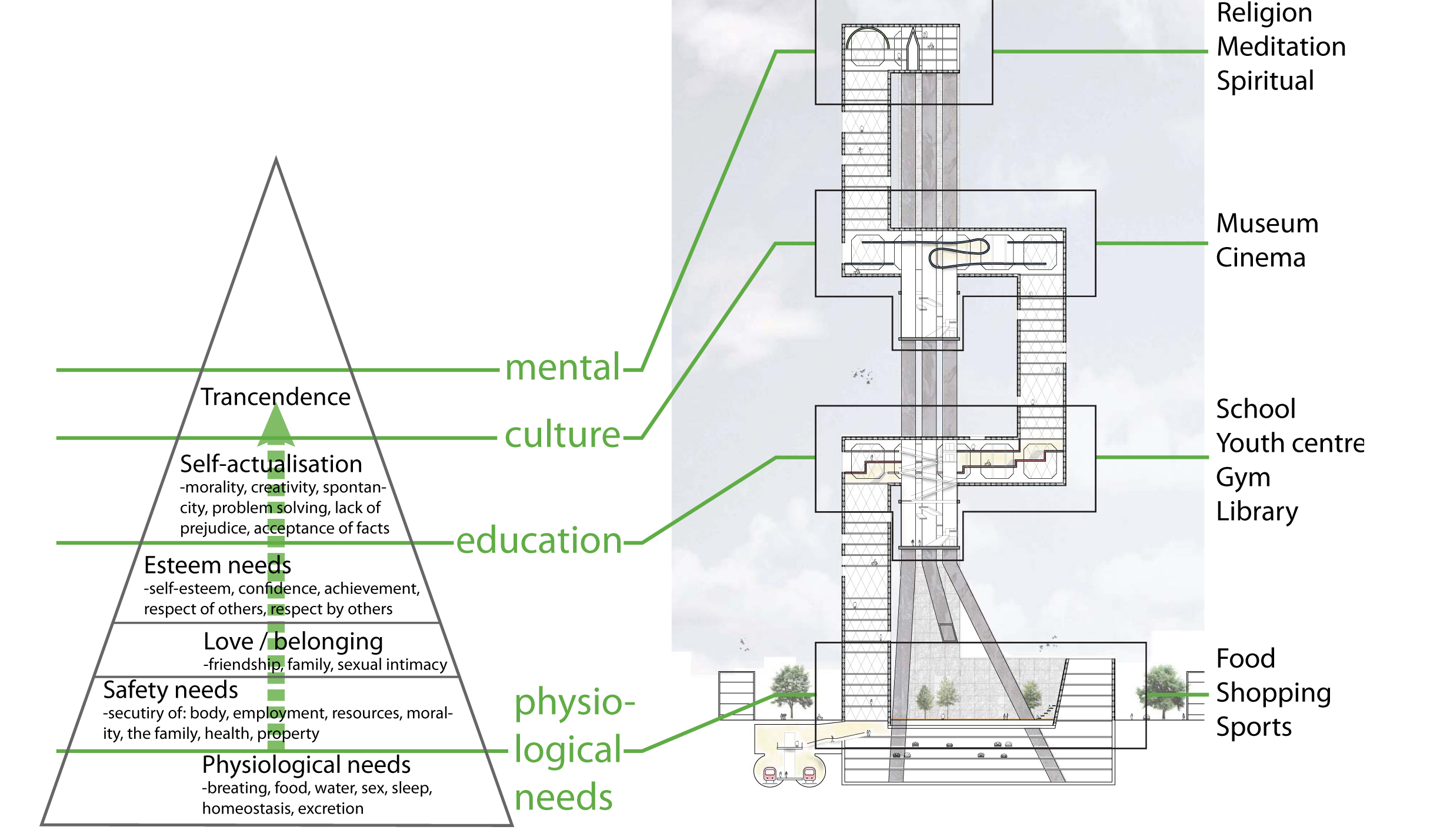 Context Implementation
A generic definition provides a framework of possibilities when implemented in a specific context. To justify our masterplan outlines, we decided upon a design case-study in which the integration of our design could be tested. The city ofAlmereis a new town adjacent toAmsterdam, first house completed in 1976, to house the working class of the Dutch capital city. It was first conceived as a mono-functional housing community.

4            The skyscraper gives identity to the neighborhood. Instead of being part of a large generic city, a social community will arise around, throughout and because of the tower. The building is identifiable and defines the housing area as such.

5            A lively plinth embeds the skyscraper in the urban context. A connection is made on various levels: an underground station to commute between cities, a parking garage for easy access from the surrounding neighborhoods and three elevators that will take you to the social junctions up in the building for connection on the smallest level.

6            The design framework given by the skyscraper is adaptive and will provide possibilities to depict an ever-changing society. This enhances the durability of not only the building itself, but also enhances the livability of the neighborhood. In terms of skin and technical wrapping the functions of the façade contain an interchangeable system of panels that correspond to specific contextual desires, such as electricity, water and ventilation. 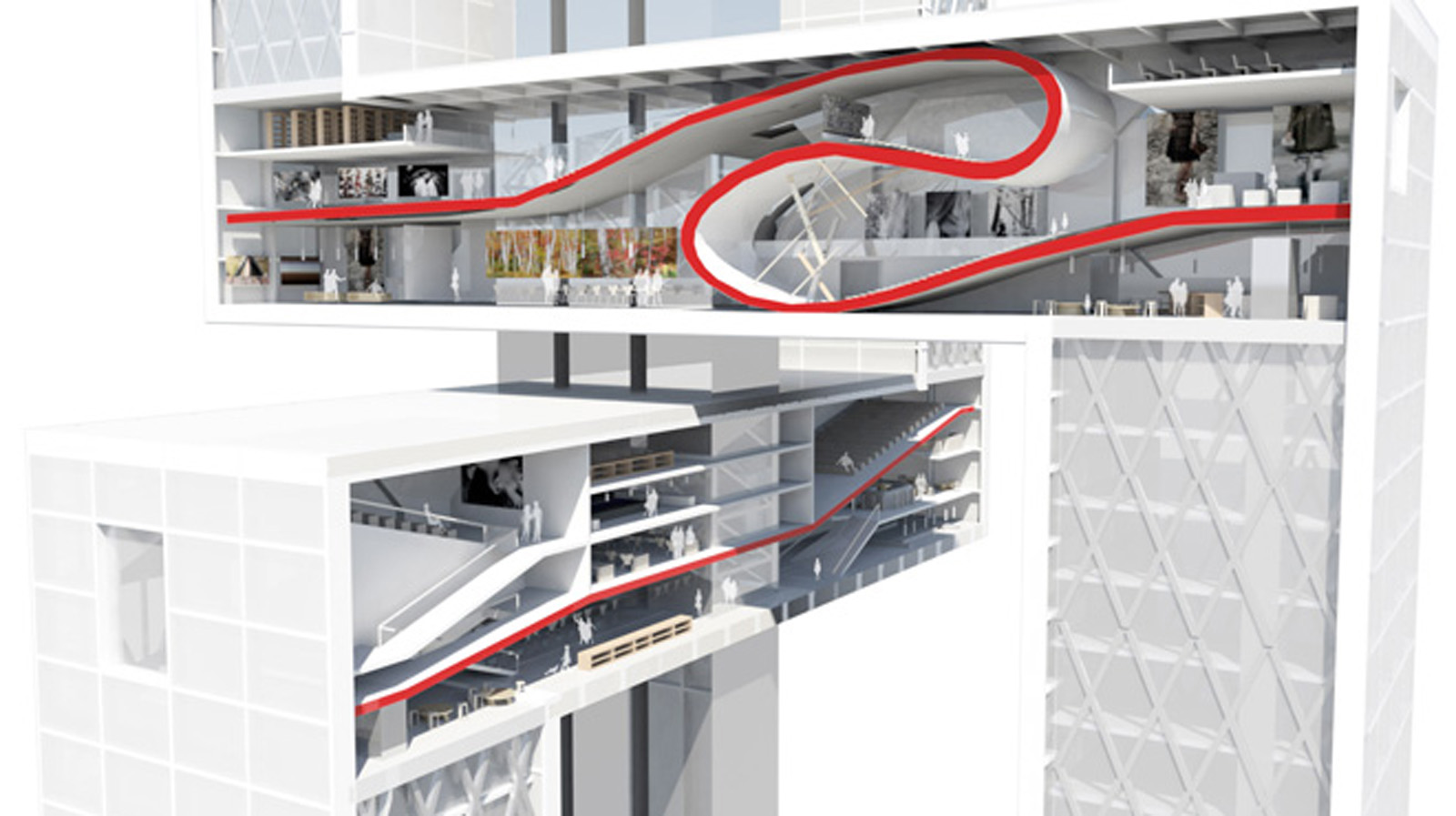